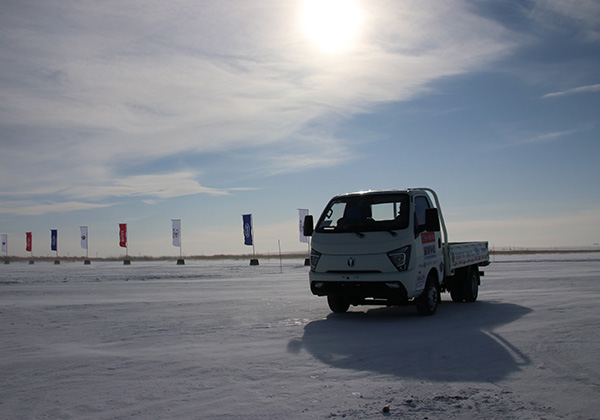 Feidi, Dito GX conducted a successful start at -40℃ in a mere 12.5 seconds, in a test where many similar models failed.

After the start, GX also participated in the snow circle contest by time recording, control on snow covered road by time recording, acceleration on snow-covered square, driving competition around the pile, off-road experience, and the drifting contest and so on. By joining those specific special performance testing, it turned out that Dito’s performance was far more than the models of same grade.

What’s the highlights to enable Dito to be entitle so many prizes?

A highly refined model, the Dito GX was designed by both domestic and overseas R&D teams for 3 years. On 23 November, 2016, its launch day, Wuzheng recieved 6800 orders for the vehicle.

The Dito GX is designed with the concept of saving energy, efficiency, comfort and safety. Dito GX’s main use is in the transportation of light goods between urban areas, and urban and rural areas. It’s fitted with a cabin width of 1750mm, 108hp euro V engine, gearbox of 5 speeds, welded rear axle of 1028, EPS, independent front suspension and other configurations.

It is also known as a benchmarking model with Wiso Io T for timely monitoring and its CRM system for safe driving guidance.

DITO options include an enlarged dual-row seat model, a caravanning model, a new energy model and so on. All these attempts in new technologies enable consumer insight in a life with a futuristic truck.

Dito was awarded the oil-saving champion at the 9th CTR, the promising model of the year 2017, the recommended model in 2018, the most market potential light truck brand and so on. At the CTR 2018, Dito won the attention of many mainstream media outlets such as CCTV, People.cn,  Sina motor, Sohu automobile, NetEase automobile, Tencent, the Pacific automobile network, the Auto home, Ifeng.Com, people.com.cn, yizhibo.com live video, PPTV,douyu live video and other popupar TV, print and video media all over China.

The New Technology of Wuzheng Adds Value to Forage Crops