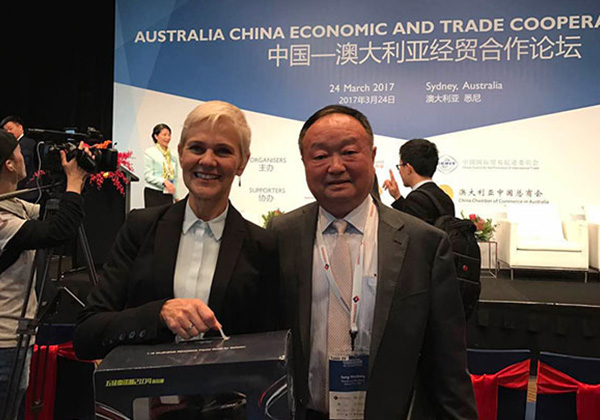 On March 24, Premiere Li Keqiang and Premiere Malcolm Turnbull attended Australia-China CEO Roundtable Conference and Australia China Economic and Trade Cooperation Forum. Jiang Weidong, president of Wuzheng Group, was also present at the forum, by invitation, as a member of the Chinese economic and trade delegation.

Technological and commercialized innovation is one of the subjects of this year’s forum. Wuzheng Group, as a key machinery manufacturer in China, takes the lead in introducing and innovating high-end agricultural machines and key technologies. Its technologies, such as power-shift high-powered tractors, silage machinery and tobacco whole course operating machinery, have filled a gap in China and became first in the country. In recent years, Wuzheng, by taking the opportunity of implementing “the Belt and Road initiative”, actively developed its exchanges and cooperation with such countries like Australia and New Zealand in economy, trade and technology, and has achieved satisfactory results in product export and technology introduction.

During the forum, Jiang Weidong exchanged views with local industrial and commercial figures and Stephanie Fahey, the Chief Executive Officer of Australian Trade and Investment Commission. He introduced the industrial development status and the international development strategy of Wuzheng Group. He sincerely left an open invitation for a visit to Wuzheng Group.

Jiang Weidong also visited local clients and users and investigated how well the group’s products were used in local communities.